You are here: Home / News / Racing and Gaming chair says they’ll look at Linn and other counties for possible new license 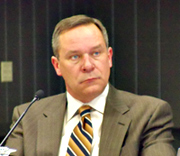 The chair of the group that regulates casino gambling in the state said today they are obligated to take a look at a proposal for a new casino in Cedar Rapids once it is submitted.

Linn County voters approved a referendum Tuesday — with 61-percent of the voters saying yes — and developers had said they want to build a casino along the interstate downtown.

Iowa Racing and Gaming Commission chair, Jeff Lamberti of Ankeny, deferred comment on the possibility of new casino earlier this year — saying he wanted to wait until a referendum was passed.

“What happens now that a referendum has been approved, they will need to submit a formal proposal to us. Because, before they submit that we really don’t have what the proposal is, the specifics of it, the location the size, those kinds of things,” Lamberti said. “When we actually have a proposal, an application before us, that’s when the commission can really start our work.”

Lamberti said they are anticipating receiving a proposal from the Cedar Rapids group, and then they will start doing some research. “We’ve got to study it relative to our criteria about issuing a license, and certainly one of those is the impact on our existing facilities. So, at a minimum we are going to feel obligated to do that,” Lamberti said.

He said they will fully study all those issues surrounding the Linn County casino before making any decision on a new license. Lamberti said he thinks they will also have a discussion on whether they should expand their study on a new casino to other parts of the state.

“Central Iowa, because the discussions in Warren County, who knows possibly in the Fort Dodge area, some of the other areas,” Lamberti said. “That’ll be a discussion the commission will have, but kind of the triggering event if for us to have an application before us so that we can commence those studies.”

A Warren County development group announced plans in February for a casino that would be built in the northwest corner of the county. That group is collecting signatures and hopes to have a gambling referendum on May seventh. Developers in Fort Dodge were turned down the last time the Racing and Gaming Commission took proposals for a gambling license.

The commission decided to approve just one license for Lyon County in far northwest Iowa, and the Grand Falls casino opened there 22 months ago.