You are here: Home / Education / Sequester’s a $46 million hit to State of Iowa’s budget (AUDIO) 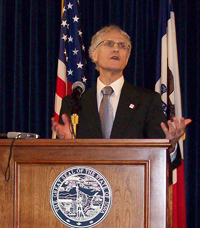 Federal funding to the State of Iowa has been reduced by about $46 million because of the so-called “sequester” cuts that went into effect March 1.

Iowa Department of Management director Dave Roederer — the top budget advisor to Iowa’s Republican governor — held a news conference this morning to discuss the details, but Roederer began with a barb aimed at President Obama.

Terrace Hill is the Victorian-era mansion in Des Moines that is the home of Iowa governors. White House officials announced public tours of the president’s home were cancelled, due to the budget cuts.

According to Roederer, 205 state government programs will be impacted by the federal budget cuts.

“The direction that the governor gave all of the departments was to make sure that they do everything within their power to minimize the impact on the recipient of the service,” Roederer said. “…That’s what agencies are in the process of doing right now.”

The Iowa Department of Education gets hit with about a third of the $46 million in cuts. More than 100 teaching positions in school district reading programs are effected. Roederer cautions it’s too early to talk about furloughs or layoffs, as some workers get a small portion rather than their entire salary from federal sources.

“The danger, of course, and this is — I think — one of the things the federal government is going to have to struggle with on this: furloughs work as long as it’s a short-term problem,” Roederer said.

Under the current law, the so-called “sequester” cuts in federal spending are to last for 10 years.

“If something were to pass in Washington and say, hey, this is only going to last for two months or three months or whatever, then we’re talking about another scenario,” Roederer said. “Our assumption, right now, is that these cuts will be made permanent and that we need to plan accordingly.”

Roederer’s report indicates 565 Iowa National Guard soldiers will be furloughed for 22 days, but they are all full-time federal employees, so that has no impact on the state budget.

The Iowa Department of Public Health has dozens of programs that will be shorted federal support, for a total of reduction of nearly nine-million dollars in that state agency alone. Roederer says officials in all 50 states will continue to struggle to figure out the impact of these budget cuts until there’s some sort of signal from Washington that a permanent federal budget plan is forthcoming.

The entire state budget is more than $12 billion, about half of which comes from the federal budget. The $46 million hit is 0.4 percent of the entire state budget. Roederer estimates that is equal to 236 full-time employees, but — again — some employees in state government get just a portion of their salary paid with federal money.

“We’re looking at what kind of flexibility, one, that our federal partners will give us,” Roederer told reporters, “but the other is how can we move people around to cover the short-fall areas.”

(This story was updated at 12:41 p.m. with additional information.)