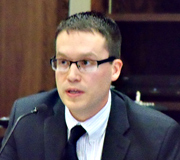 State gambling regulators say a program requiring the state’s casinos to seek out Iowa-based businesses when buying supplies showed an increase in its numbers in the last fiscal year.

Iowa Racing and Gaming Commission administrator, Brian Ohorilko, talked about the “Buy Iowa” program during a report on the economic impact of the industry Thursday.

He says 71-percent of the money spent on supplies and services is spent in Iowa.

The casinos spent $362-million on supplies and services last year and Ohorilko says they have done a good job of finding local vendors.

“Eighty-nine-percent is the average and all properties are within 10-percent of that figure with the exception of Isle of Capri Bettendorf, Lady Luck Marquetts and Argosy Sioux City. But there are some challenges due to the locations of the communities — especially in Marquette with it being a smaller community,” Ohorilko says.

He says the casino industry was once again above the one-billion dollar mark when it comes to overall impact on the state. “All in all I want to note that the entire economic impact from the four areas that are in the report — payroll and equipment, supplies and services, taxes and fees, and charitable donations comes to over 1.1 billion dollars,” Ohorilko says.