You are here: Home / News / Member of Ireland’s Parliament in Iowa for St. Patrick’s festivities (AUDIO) 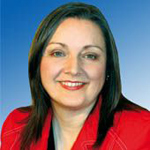 Many legislators are wearing a bit of green today as a welcome to a member of the Irish Parliament. Deputy Marcella Corcoran-Kennedy spoke in both the Iowa House and Senate this morning.

“This is my first official engagement overseas. I’m really delighted to be here and to be going to Emmetsburg,” Corcoran-Kennedy said.

She will be the Grand Marshall of Emmetsburg’s 53rd annual St. Patrick’s Day parade on Saturday. Corcoran-Kennedy, who is 50 years old, was a local official in central Ireland until 2011, when she was elected to the Irish Parliament.

“You might know how difficult times have been in Ireland,” she said. “At the moment, we’re focusing very much on employment, getting people back to work; focusing on development and improving our health systems — just as I know you are here all working to make your communities a better place for everybody.”

Corcoran-Kennedy touted what is called “The Gathering 2013.”

“An initiative of the government to, I suppose, invite all the diasperate to come back and celebrate with us and help us get back on our feet,” Corcoran-Kennedy said. “So you’re all most warmly welcomed to reconnect with your Irish roots if have any and, if you don’t, come anyway.” 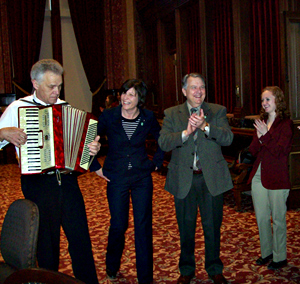 Joe Seng plays the accordian on the Senate floor.

Senator Joe Seng, a Democrat from Davenport, brought his accordion into the capitol today and played a few tunes for a crowd around his senate desk early this morning.

“I don’t want her. You can have her. She’s too fat for me,” Seng sang as he played the “Too Fat” polka, drawing laughter from the crowd.

Daryl Beall, a Democrat from Fort Dodge, is the senator who officially welcomed Corcoran-Kennedy to the statehouse. He has visited Ireland.

“When I visited the Irish Parliament, they had something that I think might be a good idea. They have a pub right off their house, right off their chamber. One is for the members and another — there’s a separate one — where we could entertain our constituents,” Beall said.

“Don’t you think that’s a marvelous idea that we could borrow from our Irish friends?” Beall and his colleagues laughed.

Alcohol is banned from the statehouse and the entire state capital complex in Des Moines. Legislators have had to vote to allow champagne to be handed to Hy-Vee Triathlon runners when the finish line was on the capital grounds. Lawmakers also vote annually to allow wine to be served at The World Food Prize banquet that’s staged inside the capitol. A few legislators routinely vote against those exceptions.