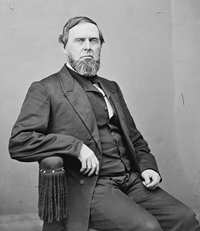 The Iowa House has voted to let a statue that has been standing in the U.S. Capitol for decades be on “permanent loan” to a southeast Iowa college.

The likeness of James Harlan has been one of two statues from the State of Iowa on display in the capitol building, but the House has voted to ship Harlan’s statue to Iowa Wesleyan College in Mount Pleasant in 2014.

“This is a very proud moment for my community of Mount Pleasant,” says Representative Dave Heaton.

“I think it’s a great idea that Harlan is coming back home and will be housed at the Iowa Wesleyan campus where they will be responsible for taking care of the statue and making sure it is maintained in that location,” Mascher says.

Heaton is a graduate of Iowa Wesleyan College.

“I’ve long known about Senator Harlan and his impact on our community,” Heaton says. “One only has to drive by his former home up near our square, now called the Harlan House — which is a big apartment house for people, but in the ‘golden days’ it was his really a beautiful, palatial residence.”

A statue of an Iowa native who gained international fame in the 20th century will replace Harlan’s statue in the U.S. Capitol in 2014. Cresco native Norman Borlaug won the 1972 Nobel Peace for his work on improving rice yields. A sculptor was chosen this past fall and the target date for installation is March 25, 2014 — the 100th anniversary of Borlaug’s birth. Harlan was a well-known figure in the 19th century, according to Mascher.

Harlan turned down the opportunity to be the Whig Party’s nominee for governor in 1850. He was first elected to the U.S. Senate as a member of the “Free Soil” Party and then became a Republican in 1857. He was a close friend of President Abraham Lincoln.

“Harlan’s daughter, Mary Eunice Harlan, married Lincoln’s son, Robert Todd Lincoln,” Mascher says. “They also have a home in Mount Pleasant, on the Iowa Weslyan campus, that has become a museum and it holds a lot of memorabilia from both the Harlan and the Lincoln family, so I’d encourage people to stop by and see it. It’s on my to-do list now that I know more about it.”

Harlan left the U.S. Senate in 1865 to serve as Secretary of the Interior for President Andrew Johnson, but Harlan resigned from the post over disagreements with President Johnson and won reelection to the Senate. Representative Heaton says Harlan’s statue will be shielded from the elements once it reaches Mount Pleasant.

“We are hoping to have this statue placed at our Iowa Wesleyan Library, the office of our president, in the lobby,” Heaton says. “It will be sheltered from the outside. It will be protected forever.”

The State of Iowa will pick up the tab for transporting the statue from Washington, D.C. to Mount Pleasant. Original plans had called for bringing the Harlan statue to the state capitol once it’s replaced by Borlaug’s likeness. Now that the Iowa House has voted to send it to Mount Pleasant, senators must vote on the proposal, too, before the deal is done.

Harlan became president of Iowa Wesleyan in 1853. He began serving in the U.S. Senate in 1855. Harlan died in Mount Pleasant in 1899 and that’s where he is buried.