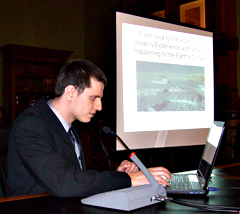 An Iowa native who’s become an expert on “sea ice” says the Arctic could be ice-free “within a decade.”

Nathan Kurtz, a NASA scientist, grew up in Fort Madison and earned his undergraduate degree in physics from Iowa State University in 2004.  His doctorate is in the physics of the atmosphere.

“I just learned basic science. I didn’t come in with an agenda or anything like that and, in doing this — making this into a career — I’ve seen first hand these indicators of a changing climate,” Kurtz says. “…I’ve flown over both Antarctica and Greenland, so when I say, ‘See,’ I’ve seen it with my eyes.”

Kurtz says data from satellites and instruments on the Earth shows sea ice has been decreasing in thickness at a rapid rate over the past several years.

“As all this ice starts to thin, we know at some point the arctic is going to be ice-free,” Kurtz says.

Some calculate that will happen as early as 2020, while other scientists calculate the Arctic will be ice-free by 2040 or later. The Earth’s polar regions act as “air conditioning” for the planet, according to Kurtz, who says the massive ice fields determine circulation of the atmosphere, too. Kurtz says that means weather patterns will change.

“For Iowa, in general, the research that I’ve done has really shown climate change could cause increased frequency of disruptive weather events,” Kurtz says. “In terms of projecting this into the future, it’s very difficult to project for a specific region like Iowa, but the current projections say warmer and wetter.”

According to Kurtz, the research suggests there will be more “heat waves” and more precipitation when it rains or snows. Kurtz gave a mid-day lecture at the statehouse and will speak again tonight at the First Unitarian Church in Des Moines.