Two state legislators — one Republican and one Democrat — are being honored with the 2013 Herbert Hoover Uncommon Public Service Award.

Republican Representative Dave Heaton of Mount Pleasant received the award during a ceremony in the Iowa House this morning.

“I just never would ever have imagined a restaurant owner who had to wash a lot of dishes in his life would ever receive an award like this,” Heaton said, “or have the opportunity to be in this room to work with you all for the betterment of the people of Iowa.”

Heaton, who is 72 years old, owned the Iris Restaurant in Mount Pleasant. He has served in the Iowa House since 1995. Heaton is the long-time leader of the panel that writest the budget for the Department of Human Services.

“Through his work and humble leadership, he inspired other legislators to greatness and achieves monumental changes for the State of Iowa,” Smith said this morning. 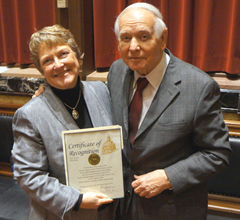 Democratic Senator Amanda Ragan of Mason City is the other recipient of this year’s Herbert Hoover Uncommon Public Service Award.

“I’m really very humbled by this,” Ragan told her senate colleagues this morning. “…Herbert Hoover has a special affinity for me because of his great humanitarian works with feeding the hungry and I think that sometimes that is overlooked in his career. If we look beyond the political world, for many of us, we see the things we do outside.”

Senate President Pam Jochum, a Democrat from Dubuque, said Ragan’s children say the most important lesson they’ve learned from their mother is to “do the right thing, not the easiest thing.”

“Charles and Edith believe their mother will be an inspiration for generations in their family due to her journey from being a single divorced mother in college to a state senator in just a decade,” Jochum said.

“But I would never be here and getting an award and I don’t think any one of us when we get an award gets it as ourselves,” Ragan said. “It’s because of our colleagues and our friends and, for me, it’s been especially my family that has been there for me and opened up doors and let me have opportunities that not just anybody else would have had.”

AUDIO of ceremony for Ragan in Iowa Senate

AUDIO of ceremony for Heaton in Iowa House

Herbert Hoover, a native of West Branch, Iowa, is the first American president to be born west of the Mississippi River. He was elected president in 1928 and served one term. Hoover gained international fame for managing relief efforts in Europe after World War I.