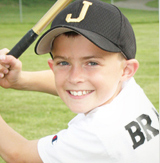 The Janesville Consolidated School District in northeast Iowa is rolling out new school bus technology in hopes of preventing an accident like the one that happened on October of 2011. Ryan Bradfield’s 11-year-old son Justin died after being run over by a school bus in front of their home.

“When he was walking in front of the bus he dropped something, and he bent over to pick it up and the bus started in motion,” Bradfield said. The school district has fitted two buses with sensors that can detect a student all around the bus.

Ryan Bradfield says an LED screen shows if there is a child in an area where the driver cannot see. “It can read through snow, ice, mud and dust,” Bradfield said. Janesville residents created the “Smile Big Foundation” in Justin’s honor and raised thousands of dollars in funds to pay for the sensor systems.

Bradfield said the goal is simple. “To prevent this from happening to anybody else,” Bradfield said. “Losing a child in this way is just terrible.”

Janesville’s school bus sensors are part of a pilot project organized by the Iowa Department of Education. Buses in Spencer and Mason City are also playing a role in this testing process to make sure the systems work well on school buses in Iowa. By the end of the school year, the department will decide whether or not to give the “okay” for schools to use them.

Ryan Bradfield hopes after the trial is completed that the foundation will be able to raise enough money to equip all of Janesville’s buses with the sensors.