You are here: Home / Sports / Brands says consistency would help Hawks wrestle title away from PSU 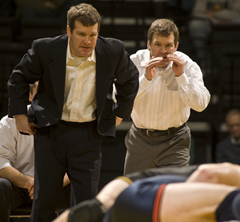 Iowa is among the teams hoping to dethrone Penn State as the NCAA Wrestling Championships get underway this morning at Wells Fargo Arena in Des Moines. The Nittany Lions are favored to win their third consecutive NCAA title, but Iowa, Minnesota, and Oklahoma State are all expected to put up a stiff challenge.

Iowa Coach Tom Brands says having thousands of fans in the stands wearing black and gold can’t hurt. “But I don’t know how much of an advantage that is unless you go out and wrestle hard. That’s what we’ve got to do,” Brands said.

The Hawkeyes qualified nine wrestlers in the 10 weight classes. Brands notes his team can’t afford an “up and down” performance – which is how he described the Hawkeyes’ season. “We need nine guys doing what our guys can do very consistently,” Brands said. “We can’t have up and down.” The Hawkeyes finished third at the Big Ten Tournament without an individual champion. Penn State, led by Coach Cael Sanderson, has all 10 of its wrestlers in Des Moines. Two are returning champions.

Sanderson’s alma mater, Iowa State, is the host school. The Cyclones have seven wrestlers competing. “Four of our wrestlers are from the state of Iowa and they wrestled in the (high school) state championships here in Wells Fargo Arena,” ISU Coach Kevin Jackson noted. “Three of them won state championships, two of them multiple times, so we’re excited.”

Northern Iowa has four wrestlers competing in the NCAA Tournament.