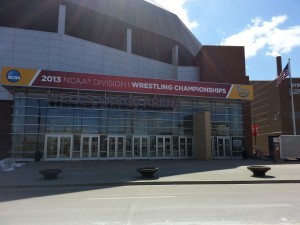 A big event that’s been eight years in the making will get underway this morning in Iowa’s capital city.

The NCAA Wrestling Championships are being held today through Saturday at Wells Fargo Arena in Des Moines.

Greg Edwards, president and CEO of the Greater Des Moines Convention and Visitor’s Bureau, says they’ve been planning for the tournament for three solid years.

“We feel very comfortable that we have everything in place, from welcome signs to volunteers to alerting all the restaurants and entertainment venues when fans will break out of the sessions and be ready to eat and drink and have fun in the city,” Edwards said.

Des Moines city officials learned they’d won a bid to host this year’s tournament back in 2010. The NCAA rejected a previous bid in 2005 from Des Moines to host the three-day event.

Edwards believes this is one of the biggest events to come to Des Moines. “We host some big annual events like the Drake Relays, the Principal Charity Classic, the Hy-Vee Triathlon, and obviously the Iowa State Fair that draws one-million people every year,” Edwards says. “But, for a weekend event, this is probably the biggest of its kind.”

Tickets for all six sessions of the tournament sold out in a matter of minutes last March. Wells Fargo Arena is designed to hold just over 16,000 fans for the first five sessions and 16,600 for Saturday night’s finals.

Wrestling fans from outside the state have raised concerns about this year’s venue – as record crowds filled larger arenas each of the past two years in St. Louis and Philadelphia. But, Edwards believes Des Moines has an advantage over those large cities. “We really give (visitors) our entire community attention,” Edwards says. “They can go to these larger markets and (the tournament) may be one of many things going on in those cities at the same time. While, in Des Moines, Iowa, they’re pretty much guaranteed to be the focal point.”

Nearly all 10,000 hotel rooms around Des Moines are booked for this weekend and bar and restaurant owners are expecting to serve a lot of customers. “Last year, St. Louis estimated a $15 million economic impact (from the NCAA Wrestling Tournament),” Edwards said. “It’s a little early for us to tell right now, but we would anticipate something very close to what St. Louis did.”

Oklahoma City will host next year’s tournament. Edwards said Des Moines will submit a bid this summer when the NCAA begins determining championship sites through at least 2017.