You are here: Home / Sports / Iowa in 4th place after opening round of NCAA wrestling tourney (audio) 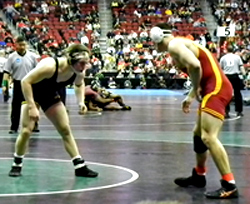 Two-time defending champion Penn State has the lead after the first session of the NCAA Wrestling Tournament in Des Moines.

The Iowa Hawkeyes got bonus points from Tony Ramos, the #2 seed at 133. Ramos scored a first period pin over his opening round opponent from Bloomsburg.

“Obviously, I want my (individual) national title, but I also want that team title,” Ramos said. “I’ve been chasing one down since I was in high school – always taking second or third. It would mean a lot to me to get that team title too.”

All four of Northern Iowa’s wrestlers won their opening matches. The Panthers’ Levi Wolfensperger had his head wrapped in tape five seconds into his match as his opponent’s teeth cut into his scalp. 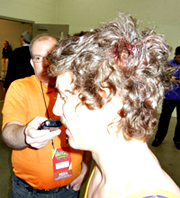 UNI’s Levi Wolfensperger required stitches to a wound on his head following his opening round pin.

Wolfensperger responded with a first period pin. “He cut me open pretty bad and I have to go get stitches here soon,” Wolfensperger said following the match.

“I just wanted to get off that mat and get rid of that tape. It was bothering me pretty bad. It was a good start to the tournament. We’re always looking for falls…get in and get out, that’s all I want to do.”

UNI, Iowa State, and Oregon State are tied for 5th in the team race with nine points. Session II of the NCAA Wrestling Championships gets underway at 6 p.m.