You are here: Home / Sports / Iowa in 4th after day one of NCAA Wrestling Championships (AUDIO) 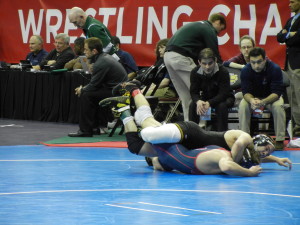 Penn State and Iowa will both have six wrestlers in this morning’s quarterfinals at the NCAA Wrestling Championships in Des Moines.

Team Scores (after day one)

Iowa 133-pounder Tony Ramos had two first period pins to lead the Hawkeyes. The junior pointed to his Iowa Hawkeye sweatshirt as he talked about his hopes of winning a national title. “It means a lot to the name on the front of this and it means a lot to my family,” Ramos said. “I got texts all week long, my dad sent me a letter, my fiance left me a letter in my bag and my brother calls me every night. It means more to my family than it does to myself, so I have to go out and get this done.”

Iowa fans had more to cheer about when #12 seed Ethan Lofthouse topped Minnesota’s #5 seed Kevin Steinhaus 3-2 at 184. “I lost to him a couple times before. It’s on a big stage right now, so it feels good,” Lofthouse said.

Iowa State’s lone quarterfinalist is Tanner Weatherman, who posted a 16-14 win over #7 seed Jordan Blanton of Illinois at 184. “I came into this tournament – trying to stay relaxed as possible – staying away from the rankings and all of that stuff,” Weatherman said. “Right now, it feels pretty darn good.”

Northern Iowa qualified four wrestlers for the tournament and they all remain alive for All-American honors, with David Bonin and Ryan Loder in the quarterfinals.

The quarterfinal round of wrestling starts at 10 a.m.