You are here: Home / News / Powerball jackpot stretches over $300-million 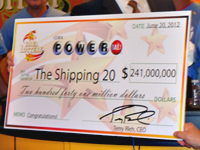 March Madness doesn’t just apply to basketball, there’s a growing interest in the Powerball jackpot has climbed into record territory for Saturday’s drawing.

Iowa Lottery spokeswoman, Mary Neubauer, says this was also big month for the lottery in 2012.

“In March of last year we saw that huge 656-million-dollar MegaMillions jackpot. That is still the biggest jackpot ever in the world,” Neubauer says.

“Then in November, Powerball reached 587.5 million dollars, and now it’s climbing back up there. It’s the sixth highest in the history of the Powerball game — it’s an estimated 320-million dollars.”

The jackpot is based on sales and could go higher than the estimate. But the timing of the drawing may impact the amount of tickets sold in Iowa. “The interesting phenomenon that we’re seeing come into play right now is spring break. A lot of people are traveling, they’re not in their normal routines because maybe they are away from home, they are on a family trip,” Nuebauer says.

“We’ll have to see how sales come in. But sales may not be as strong as they normally would be because a lot of folks are off enjoying themselves — as they should be — on spring break, so they might not be buying tickets in their normal locations.” Neubauer says the redesign of Powerball in 2012 is likely the reason we have seen the growth of the jackpots in the game.

Iowa had two big Powerball jackpot winners in 2012. “Including Iowa’s biggest lottery winners ever. Those were the Shipping 20, which were that group of co-workers from the Quaker Oats plant in Cedar Rapis. They claimed a $241-million jackpot prize in June of last year,” Neubauer says.

A Bondurant couple, Brian and Mary Lohse claimed a jackpot of $202-million in November of last year.