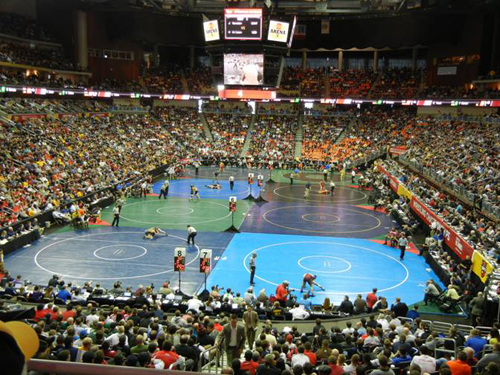 But, Derek St John at 157 and Tony Ramos at 133, advanced to the semifinals. Ramos scored a 6-1 victory over Jonathon Morrison of Oklahoma State. Tonight, he’ll now face Wisconsin’s Tyler Graff, who tends to wrestle defensively, according to Ramos.

“It’s hard to wrestle a guy who goes back, back, back…but we’ve figured it out. We’re going to put up a lot of points. You have to make him wrestle you,” Ramos said. “I had to make Morrison wrestle me.”

Northern Iowa has one semifinalist. David Bonin, who enter the tournament unseeded at 157, became an All-American this afternoon while winning his 100th career match. Three Panthers remain in contention for All-American honors in the wrestleback bracket. Iowa State will not have a semifinalist, but four Cyclones are active in wrestlebacks.

Semifinal round action begins at 6 p.m.