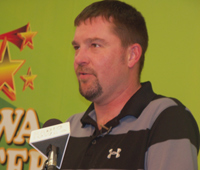 A Mahaska County man cashed in a $2-million Powerball ticket at Iowa Lottery headquarters in Des Moines Monday. Thirty-eight-year-old Michael Lally of Barnes City said he bought five easy-pick tickets for Saturday’s drawing, and then didn’t think anything of it until he started the work week.

“I heard on the radio this morning while I was plowing snow that somebody else had won the big one, but there was a winning ticket from Oskaloosa,” Lally said. “I thought, well maybe it was me, but I thought it can’t be.” Lally stopped by a store to check his tickets and heard the “Woo hoo” sound the lottery machine makes when there’s a winner.

The clerk held the ticket up and Lally said “I just started shaking, I couldn’t believe it.” Lally was one number away from winning the $383-million jackpot — missing on the Powerball. But he doesn’t see it as losing out on $381-million.

“I look at it as I won two million…it still hasn’t sunk in yet. It’s like a great weight has been lifted off my shoulders. I can take of things now the way I have always been trying to and not feel the pressure, as far as trying to pay the bills, you know everybody has problems,” Lally said.

He bought the winning ticket at a Kum & Go at 1201 N. Market St in Oskaloosa. Lally is raising a 16-year-old son who is a junior in high school. “His college is now paid for, I don’t have to worry about that anymore,” according to Lally. “Obviously I’m going to get a new vehicle, pay some bills, and the rest will be invested.” 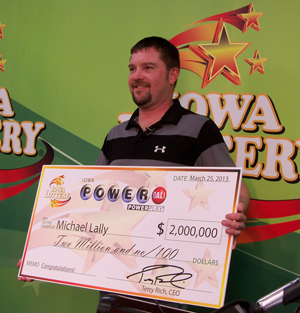 It was a busy day for Lally who called his boss and told him he had to bring in the winning ticket. News traveled fast that he had a big winner.

“It didn’t take very long, let’s just say,” Lally said. And he apologized to everybody who had been calling and texting him and said he couldn’t return their calls because he was driving.

“But thank-you to everybody that’s been calling and texting and all.”

Lally takes home $1.4-million after state and federal taxes. He brought brother, Jerad Lally of Des Moines, and his boss, Brian Kitzman of Gibson, with him to cash in the ticket. He doesn’t plan to give up his job now that he is a millionaire.

“No that was the first question his wife asked me, –if I was gonna quit — and then the second one was ‘are you going to buy the business,’ and I said ‘no’ to both,” Lally said.

The Iowa Lottery said Lally is the first $2-million dollar winner in the state since the format was changed in the Powerball game, and he was the only such winner in Saturday’s drawing.