You are here: Home / Military / Family and friends say goodbye to Estherville soldier 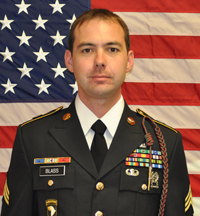 An Estherville soldier will be buried today. Twenty-seven-year-old Staff Sergeant Steven Blass died along with four others on March 11th near Kandahar, Afghanistan while serving as the crew chief of a Black Hawk helicopter that crashed during a routine training mission.

Blass’ funeral is today at two o’clock at the Estherville-Lincoln-Central High School. Blass graduated from the school in 2003 and went to Iowa Lakes Community College before joining the Army in March 2006. He was initially stationed at Fort Campbell, Kentucky.

Blass transferred to Hunter Army Airfield, Savannah, Gerogira in August 2011 and then deployed with this unit to Afghanistan in December 2012. He was previously deployed to Camp Humphries, Korea.

He is survived by his wife Tricia and son Hayden along with his parents Randy and Carol Blass and brother Mathew. The family of Staff issued the following statement:

“Steve left his home to enter basic training and begin his career in the Army. He was so proud, so anxious, and so ready. The Army is where he wanted to work with helicopters – that was his dream.

“While always letting us know how much our support meant to him and how much he loved us, Steve was living his dream, not only within the Army, but with his wife and his young son. He made a difference and touched the lives of many people throughout the world. While we celebrate his life and mourn his future, he will live forever in our hearts. We loved him, miss him terribly and are very proud of him.

“Losing Steve is so unbelievably hard. He has always been an absolutely awesome, respectful, kind, loving, thoughtful, focused, patriotic guy. He loved America and fighting for our freedoms. There’s a huge hole in our hearts and lives, and while the pride is huge, the pain is so very deep.”

The family requests in lieu of flowers, memorials may be sent to the Steve Blass Memorial Fund, Employees Credit Union, 2714 Central Ave., Estherville, Iowa 51334. Blass will be buried at the North Lawn Cemetery in Spencer.