You are here: Home / News / “Mayor for Life” in Council Bluffs retires 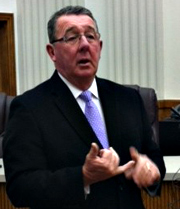 A western Iowa mayor has announced plans to retire after more than three decades in public office. Tom Hanafan has been the mayor of Council Bluffs since 1985 after being elected to the city council in 1982.

“But really in the last four years, since I got elected last time, I’ve been looking at what time to go.” The man who’s been referred to as Council Bluffs’ “Mayor for Life” discussed his decision to not run for reelection this morning at City Hall.

The Council Bluffs native believes any success he’s had as mayor was based on his management style. “You have to be a person who’s going to listen. That’s number one,” Hanafan said.

“I think the most important thing after that is let your people do their work. I’m not a police chief or fire chief or a planner. That’s not my job. I think you let those people do their job and what you’ll find is they’ll grow and expand and get better.”

The 65-year-old Hanafan and his wife have three children and three grandchildren and they plan to stay in Council Bluffs. Hanafan won his 7th term in office in 2009 by garnering almost 80-percent of the vote.