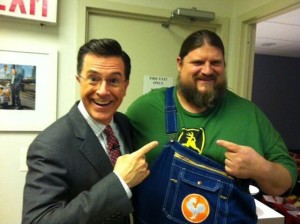 An Iowan is gaining national attention for his effort to create the “best tasting pig in the world.” Carl Blake launched the experiment in 2007 and now operates a 15-acre homestead, called Rustik Rooster Farm, in rural Frederika – northeast of Waterloo.

Earlier this week, Blake joined Stephen Colbert as a guest on the Colbert Report on Comedy Central. Blake discussed what he calls the Iowa Swabian Hall, a breed of pig that has been winning culinary contests across the country.

The formula for Blake’s succulent swine was derived from crossbreeding first conducted by King Wilhelm in Germany in the 1820s. He created the Swabian Hall by breeding Meishan Swine from China with Russian Wild Board. Blake said he bought purebred Meishan pigs from Iowa State University and was also able to obtain Russian Wild Boar, as well. The combination is a “nearly perfect balance of not too fat and not too lean,” according to Blake.

This wasn’t Blake’s television debut. He also recently appeared on Andrew Zimmern’s Bizarre Foods program on the Food Channel. And the New York Times featured an article about Blake just over a month ago.