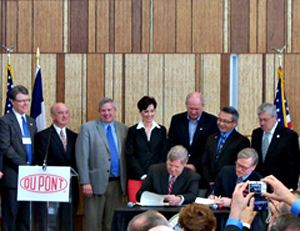 Vilsack signed what’s called “a memorandum of agreement” with company officials at the Dupont-Pioneer research facility in Johnston.

Dupont executive vice president, Jim Borel, says under the agreement the company will work with farmers that will keep topsoil in the fields and out of streams an rivers. 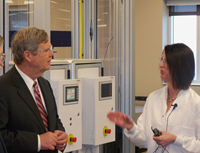 “And we sure didn’t want to solve one problem and the create another one. Which is why designed the program to be sustainable at the very outset by every measure.”

The first plant involved in this national agreement is near Nevada where DuPont is building a 30-million gallon a year cellulosic facility. “We’ve worked tirelessly to ensure that from farm to fuel we’re creating a system that’s viable for the long haul,” Borel says.

“This was critically important to us and to the growers who have cooperated with us over the last three-and-a-half years that we’ve worked to prepare the ability to bring about 600-thousand bales of stover to our facility every year. That’s about one per minute.”

Secretary Vilsack says the plan helps protect the water that the entire state uses, and he says it helps rural America.

“The reality is that you are dealing in this great adventure that you’ve started with farmers in a 30 to 50-mile radius, and you are creating a local market and a regional market for something that they grow and raise beyond the corn that they raise. You’re creating an ingredient that before that it was just something that was part of replenishing the soil — as important as that is — but now you’ve created a value to it, an additional value, an added value,” Vilsack says.

The former Iowa governor says the economic impact of the environmental practices extends beyond the waterways. “When you have cleaner water, when you’ve got stronger soils, when you have grassy areas that we are engaged in involved our overall conservation, it creates whole new opportunities for outdoor recreation,” according to Vilsack. 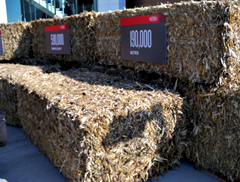 ilsack says the research into plant genetics and cellulosic ethanol conducted by Dupont will lead to innovations that help everyone.

Under the agreement, the U.S.D.A.’s Natural Resource Conservation Service will work with farmers to voluntarily come up with a plan to protect the topsoil and yield while removing some of the material that traditionally stays in the fields.