You are here: Home / News / Branstad to return to China for four-day trade mission (AUDIO) 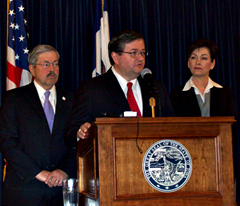 Iowa’s governor is scheduled to travel to China with governors from Wisconsin, Virginia and Guam on another trade mission.

Governor Terry Branstad leaves April 12 and will spend four days on the ground in China.

“We have a unique and long-standing relationship,” Branstad says. “Nobody can take that away from us, but if we can improve the relations for the whole nation and for other states and increase trade opportunities, I think that’s a very positive thing.”

Chinese President Xi Jinping visited Iowa in 1985 when he was a provincial official. Xi visited Iowa in February of last year for a reunion and Branstad went to China last May for his fourth face-to-face meeting with Xi.

“When I was over there before, Virginia was having some problems with apples being imported and I got a message through on that and that got resolved,” Branstad says, “so helping out your colleagues is not a bad thing.”

Forty-six other Iowans are scheduled to make the trip to China with Branstad, including Iowa Soybean Association CEO Kirk Leeds.