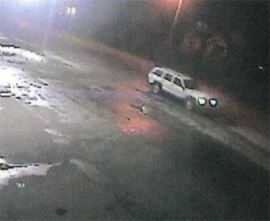 Surveillance photo of vehicle believed to be involved in hit-and-run.

A Des Moines woman is facing charges in connection with a fatal hit and run incident that occurred over two weeks ago.

Police had been working to identify the driver of a white Jeep Cherokee believed to responsible for hitting a man who was crossing a city street early on the morning of March 16.

The victim, 58-year-old Clayton Payne, died the following day. A surveillance camera from a nearby business captured an image of the Jeep as it left the scene.

Witnesses told police the female driver of the vehicle has a green light, wasn’t speeding and tried to avoid hitting Payne.

Police now say 26-year-old Kristine Gordon was behind the wheel. She’s charged with failure to render aid causing death, driving while barred, and failure to yield to pedestrian right of way.

Police say Gordon was taken into custody one week ago on other charges related to the hit and run.