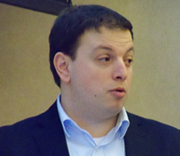 One of the sessions that got a lot of attention at the Iowa Governors LGBTQ Conference Wednesday focused on what was called the “extreme right wing.” Matt Sinovic, the executive director of a group called Progress Iowa, led the session.

“We need to remember that the right wing is just wrong. They’re just wrong. It’s been four years since all Iowans have had the freedom to marry — and what has happened? Gay people got married, that’s it. More people have rights, none have less,” according to Sinovic.

Sinovic also cited a poll showing the influence of Family Leader CEO Bob Vander Plaats has declined. He tried to show several videos of statements made by Vander Plaats against gay marriage, but technical problems prevented him from playing of most of the videos.

Sinovic told the session members that the best way to counter the “propoganda” of Vander Plaats and others is to use their own words against them. “There’s no question about what these folks are saying. It’s not like it’s taken out of context, it’s not some sort of twisted around agenda, it’s just literally video and audio of what they believe, and that is in itself the best attack, is just showing these quotes…for what they really are,” Sinovic says.

He said the difference between progressives and conservatives is that “conservatives are usually on the wrong side of history and progressives are usually on the correct side of history.” Sinovic made reference to a news conference last week where members of the Family Leader and 16 legislators spoke out specifically against this session of the conference and its attack on them.

He says gay advocates should fight back when they see the media covering such events. “You can write letters to the editor when your local paper gives credibility to this type of bullying language…I would have loved it is the press conference last week, nobody covered it. Because why are we listening to these people. The real reason that I think it got so much coverage is that there were 16 legislators there,” Sinovic says.

He says advocates should write to “right wing” legislators and complain. Sinovic also says the best way for gay advocates to sway opinion it to talk with their relatives and friends.

“There’s tons of research to back this up. If I talk to my brother and sister about this — my friends, my family about this — that’s going to be the most credible because they know me, they know you,” Sinovic says. “So, talk to your family, talk to your friends, if you hear them repeating some of the things you’ve heard here today or some of the things you might hear on the radio or news later on, or from Bob Vander Plaats later on, push back, don’t let them repeat it, challenge them on it.”

Sinovic says Progress Iowa is a “progressive” group because it is willing to change its views as issues evolve, but he says the extreme right wing sticks to its views no matter what happens.

You can listen to the presentation from Sinovic below.