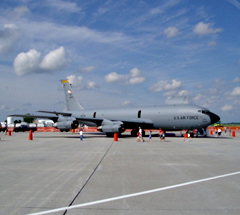 A plane at a previous Offutt air show.

After four decades of history, a highly-popular annual air show in the Omaha/Council Bluffs area is being canceled due to federal budget cuts.

There will be no “Defenders of Freedom” Air Show at Offutt Air Force Base this year, in fact, there will be no air shows there until further notice. Colonel John Rauch, the 55th Wing Commander, says canceling this much-loved event wasn’t an easy call but it may be revived, some year.

“We hope to be able to do it in the future if the fiscal situation lets us do it,” Colonel Rauch says. “It’s our apology that we can’t open up the base like we’d like to because we do know that the community provides a lot of support and a lot of welcome to the military members here.”

Rauch says the air show cost about $200,000 to put on last year. Due to the across-the-board federal budget cuts, known as sequestration, that money needs to go elsewhere.

“There are a lot of things that go towards readiness,” Rauch says. “Just maintaining the base and that sort of thing the money will be used for rather than things that we would do on the weekend.” The air show and base open house were originally scheduled for late August.

The event has drawn tens of thousands of spectators every summer since 1972.