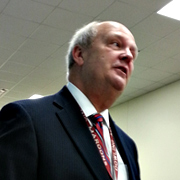 The head of Iowa’s prison system says staff at the Newton Correctional Facility were nearby and responded quickly when a correctional officer was assaulted by an inmate this week.

Shortly after the incident on Tuesday, AFSCME — the union which represents the largest share of state government workers — released a statement calling the Newton facility “dangerously understaffed.”

Iowa Department of Corrections Director John Baldwin says he’s reviewed a video of the assault. “The staff were brilliant. They handled the situation very well. There were three (workers) within 10 feet of this incident and two more showed up maybe 10 to 12 seconds later. The dog and his dog handler showed up and the staff immediately took the offender to the ground,” Baldwin said.

The inmate was placed in segregation and there was no lockdown of the facility, according to Baldwin. The correctional officer was punched several times but suffered only minor injuries.

“He was seen by an outside doctor and returned to his post that day,” Baldwin said. The AFSCME press release stated “Baldwin’s attempt to run corrections on the cheap is imperiling the safety of inmates, staff, and the community.”

Baldwin maintains the assault was “isolated” and could’ve happened regardless of staffing levels. “No one wants to see our officers get hurt – or our nurses, cooks, or anybody – it’s not right. But, it is a prison and sometimes that happens,” Baldwin said.

“We want to make sure our staff are well trained and they respond correctly to each and every incident and in this case, they did.” The Newton Correctional Facility is designed to hold 1,014 inmates, but it’s typically over capacity.