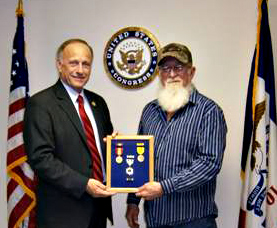 King, who has not yet decided if he will run, says Democrats have a slight edge in retaining the seat that’s been held by Democratic Senator Tom Harkin since 1982.

“President Obama ran very strongly in Iowa and a lot of that machinery’s still in place,” King says, “and I expect he would come in and support the Democrat nominee.”

King cites Obama’s eight campaign trips to Iowa during the 2012 race, as well as former President Bill Clinton’s appearances in the state, including a stop for King’s 2012 opponent Christie Vilsack.

King has paid for statewide polling to test his chances of winning a U.S. Senate race. King says he’s “moving very closely towards a decision,” but needs to analyze a few more bits of data — and do a sort of gut check before making the decision.

“There are always going to be naysayers and detractors. This is, though, first an analytical decision and I think any Republican has a slight uphill battle in this state because I has turned a little bit to the left,” King says. “This won’t be a presidential race. President Obama will not be on the ballot and I think that the top of the ticket will be able to control this a lot more than if it had been a presidential year.”

The U.S. Senate race will be at the top of the 2014 ballot in Iowa. This past week King sent out an email soliciting donations to his House campaign fund.

“It’s important to be refilling the coffers. We spent them down nearly to the bottom in this last race, the most expensive congressional race in Iowa’s history and, by the way, we raised more money than any other congressional candidate ever had and so we need to refill that,” King said. “I will tell you that because I have not made a decision, it’s harder to raise money because I have to say to people: ‘Well, on the one hand this. On the other hand, that. Will you write a check for my campaign?'”

King made his comments during this morning’s taping of Iowa Public Television’s “Iowa Press” program that airs tonight at 7:30.