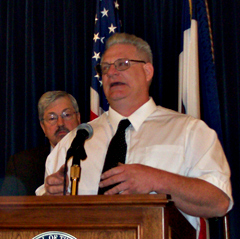 Jerry Fleenor of Pella got a $150,000  state investment for a project that seeks to reduce fuel use in diesel engines by 25 percent.

“Technology investment is a cascading event,” Fleenor says. “In this particular project we work with 22 different Iowa companies and all of those — because we have a patent on this technology — that work is going to stay here in Iowa and they’ll grow along with us.”

An “impact study” of the state’s “Demonstration Fund” found 79 companies that have received nearly nine million dollars in the past five years created 600 jobs. 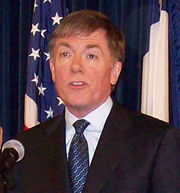 Chris Nelson, the president and CEO of Kemin Industries, is also on the board that oversees the program. According to Nelson, the state’s “Demonstration Fund” has gotten a 24 percent return on its investments.

“At least in my world of business, that’s an excellent investment and I’ll take that any day of the week,” Nelson says.

Iowa Economic Development Authority director Debi Durham plans to set aside another $2 million for the “Demonstration Fund” next year. 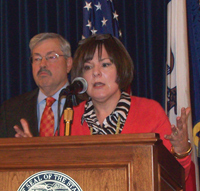 “One of the things that’s important to me is can they get follow-on funding because the state is not your bank,” Durham says.

“We are only there to do some very small strategic placement of incentives at the right time.”

According to Durham, 45 percent of the companies that responded to their survey have gotten additional financing from their projects. Governor Branstad says this program is helping to improve the “innovation eco-system” in Iowa.

AUDIO of Branstad’s weekly news conference, at which this issue was the first topic of discussion.