You are here: Home / Business / LeClaire gains more national recognition for being cool 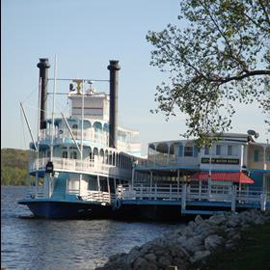 A national publication has pegged a growing Mississippi River community as one of “America’s Coolest Small Towns.”

LeClaire is the only Iowa town to make this year’s list compiled by Budget Travel magazine. Towns with populations of less than 10,000 were considered for the list.

LeClaire Tourism Manager Cindy Bruhn says just under 4,000 people call LeClaire “home” – that’s up from 2,800 a little over a decade ago.

“We are close to a lot of the big corporations like John Deere and Alcoa…but a lot of families want to live in a smaller town with a nice school where they know their neighbors,” Bruhn says.

“So, that’s been a huge draw.” LeClaire may be best known as the birthplace of Civil War era soldier and showman William “Buffalo Bill” Cody. One of the town’s top attractions is the Buffalo Bill Museum.

In the 19th century, Bruhn says LeClaire also served as home to river pilots who helped navigate boats through the dangerous Upper Rapids. “That was a big deal. River pilots lived here and got on to other people’s boats and helped them navigate further on down the river,” Bruhn says.

“They came back home either by walking or by horseback.” Many of the homes and buildings constructed by the river pilots are still standing in LeClaire and are open for tours.

LeClaire has also garnered national attention as the home base for the American Picker’s show on the History Channel. Bruhn says yet another attraction is the Mississippi River Distilling Company, which offers free tours and tastings. The distillery’s products include Cody Road Bourbon and River Pilot Vodka. Bruhn says tourists also visit LeClaire for cruises aboard the Riverboat Twilight.

LeClaire was among 15 towns named finalists for the title of “America’s Coolest Small Town.” Budget Travel selected Lititz, Pennsylvania as the winner for 2013.