You are here: Home / News / State funds sought to honor the “Duke” in Winterset 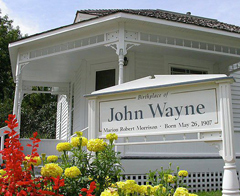 The John Wayne birthplace in Winterset.

Officials with the John Wayne Birthplace in Winterset will go before the Vision Iowa Board today to seek state funding for a museum honoring the movie star.

Birthplace director Brian Downes says the museum will be built next to Wayne’s birthplace home – which is already the area’s biggest tourism draw.

“Our chamber of commerce recently announced that two-thirds of the people who come to Winterset come to see the John Wayne Birthplace,” Downes says.

“According to surveys, that’s the reason they come here.” Around $1.5 million is needed to build the 9,000 square foot museum.

Downes says they’re roughly half way toward meeting that goal thanks to individual donations and contributions from the City of Winterset, Madison County and local businesses. The owner of the largest privately held John Wayne memorabilia collection has also agreed to give the museum a host of items valued at $2 million. 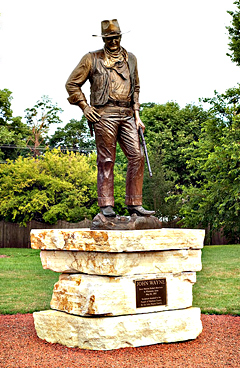 “That came from our Birthplace Board president Joe Zuckschwerdt, who lives in Philadelphia, Pennsylvania,” Downes says.

“He’s been collecting for 40 years and he has loads of movie posters, film wardrobes, photographs, scripts, contracts, fine art, letters, and even John Wayne’s personal date and address books.”

Several fundraising events are planned next month for John Wayne’s 106th birthday celebration in Winterset. Downes says the festivities will draw fans of “The Duke” from across the country and beyond.

“People from 40 states and England and Scotland have made reservations,” Downes said. “John Wayne did the hard work a long time ago and we’re just keeping it alive.

” The John Wayne Birthday Celebration in Winterset is scheduled for May 24-25.

Maureen O’Hara, who starred in several John Wayne films, is scheduled to speak at a museum benefit dinner.