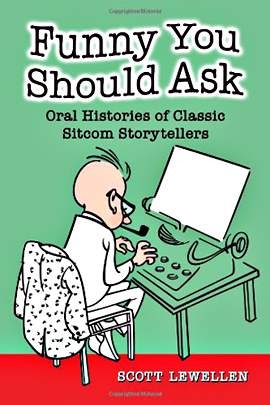 A central Iowa man has turned his love for classic television sitcoms into a book. Scott Lewellen of Des Moines is author of Funny You Should Ask: Oral Histories of Classic Sitcom Storytellers.

“I would say the main reason that I wrote the book was because I wanted to read it,” Lewellen said.

“I’ve always been interested in sitcom writing and sitcom writers and I didn’t think there was a really good book out about them, so I said, ‘maybe I could write one.'”

Lewellen interviewed 22 comedy writers about how they broke into the business, the process of writing scripts, and what it was like working with some of the top sitcom actors from the 1950s-80s.

“Most of the interviews actually took place in person, although I did some of them by phone because several of these people are scattered throughout the country,” Lewellen said.

“I was able to locate a number of them through the Writer’s Guild. I got turned down for very few interviews, most people were happy to talk about their work as sitcom writers.”

Many of the early TV sitcom writers enjoyed long careers working for multiple shows and a few made the transition to television after writing for radio.

Lewellen said he was especially honored to meet Bob Schiller, who wrote episodes of “I Love Lucy” and “All in the Family.” “I would say All in the Family is probably my favorite TV sitcom because of the way it mixed comedy and drama,” Lewellen said. “It’s just very well acted, very well written, and I think very realistic. They were able to mine humor from everyday situations.”

Any fan of classic TV sitcoms should enjoy the book, but Lewellen suggests it could also serve other purposes. “I think it would have potential use in a college class, not only about television history, but also about television writing,” Lewellen said. “It’s not an instructional book, but just in talking with these people, I know I certainly learned a lot about writing.”

This is Lewellen’s first book, but he hopes to write more about television history. Lewellen is co-founder of Saturday Manufacturing, a marketing firm based in Des Moines.