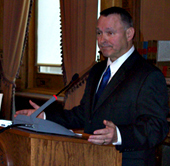 The state treasurer is wading into the conflict over completing plans to provide health care coverage to poor Iowans.

“I’m very concerned about the state’s financial health and how we spend our money and this program is real money,” Fitzgerald said this morning in Des Moines. “In the first three years the governor’s plan will cost the State of Iowa almost half a billion dollars.”

Democrats in the Iowa Senate are pressing Republican Governor Terry Branstad to accept the federal offer to expand the number of Iowan’s who’re enrolled in Medicaid, with the federal government covering all costs for the first three years. Fitzgerald said the alternative Branstad proposes would require $56 million in state income taxes and another $85 million from Iowa property taxpayers next year.

Branstad counters that the state cannot depend upon the federal government to provide the money for Medicaid. The governor calls Medicaid a flawed program that doesn’t improve the health of Iowans. Fitzgerald, who has been state treasurer since 1983, said the federal government has been a “dependable partner” in a variety of state programs, including Medicaid.

“The governor’s plan is quite frankly a bad financial investment for the state of Iowa,” Fitzgerald said.

A spokesman for Governor Branstad says the governor isn’t interested in “partisan bickering” and believes that “now is the time to come together to find a solution.” Branstad spokesman Jimmy Centers says Branstad’s “Healthy Iowa Plan” is more “modern” than Medicaid and “sustainable” financially for the state.

Fitzgerald spoke to reporters this morning during a statehouse news conference.

Fitzgerald scheduled to be in Cedar Rapids at one o’clock and in Davenport at three this afternoon.