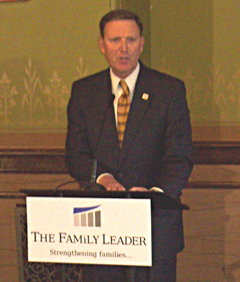 A leading Iowa Christian conservative is calling for senators to vote again on the nomination of a man Governor Branstad had asked to serve on the Board of Regents.

Robert Cramer, president of the Iowa Family Leader’s board of directors, lost his confirmation vote in the senate Monday.

“It is more than disturbing to see the senate, controlled by the Democrats, to deem him unfit to serve on the Board of Regents,” Vander Plaats said. “…They deemed him unfit because he holds to some core standards, some core values, one of them being that he believes marriage is the union of a man and a woman.”

“I think all Iowans should be concerned,” Vander Plaats said, “that there should be a cautionary flag raised about what is going on here.”

According to Senate Rules, a re-vote could have been scheduled if a senator who voted against Cramer on Monday had filed some paperwork by Tuesday night calling for another vote, but that didn’t happen. Vander Plaats is not convinced.

“I do believe, as a matter of fact if you read the statutes that surround this, I think there’s plenty of gray area, where (Senate Democratic Leader Mike) Gronstal and Branstad could find a remedy,” Vander Plaats said. “It might be as easy as Branstad saying, ‘I’m going to reappoint (Cramer) and you guys reconsider him.”

According to the governor, that’s not an option.

Branstad beat Vander Plaats in the 2010 Iowa Republican Party Primary for governor. Cramer backed Vander Plaats in that race, yet Branstad asked Cramer to serve on the Board of Regents. The governor also asked Board president Craig Lang to serve another six-year term. Both Lang and Cramer lost confirmation votes in the state senate Monday.

“I was very disappointed with the shabby way that both Craig Lang and Robert Cramer were treated,” Branstad said. “We, you know, made a valiant effort.”

Branstad notes both men got “yes” votes from a majority of the 50 senators, but the people Iowa’s governor nominates to state boards and commissions have to win a two-thirds majority of 34 senators. Lang fell four votes short. Cramer was seven votes short. Branstad said Cramer’s background as a construction company executive would have been helpful as the state universities embark on major building projects.

“I don’t think a religious litmus test ought to be imposed on people,” Branstad said. “And I think people ought to be judged on their experience and their ability and I think that Robert Cramer was very well-qualified to serve.”

According to a key senator involved in the debate over Cramer’s nomination, even if a re-vote were taken, the outcome would be the same.