You are here: Home / News / April showers helping parts of state pull out of drought 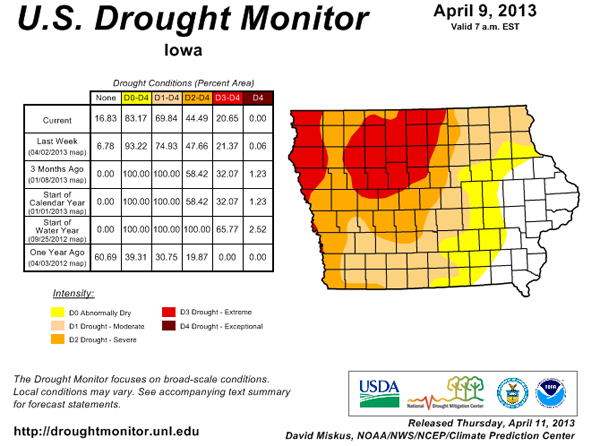 “In the long term, we do have some very substantial precipitation deficits, especially over north-central and northwestern Iowa,” Hillaker says. “It’s certainly not because of recent weather. We’ve been quite wet here for the last few months and especially the last week.”

The statewide average rainfall for this week is over 2.6 inches. “This has actually been our wettest week since June 2011,” Hillaker says.

“So, things have been turning around here recently. But, we still have a ways to go, especially in terms of subsoil moisture in the northwestern part of the state.” Hillaker expects the next drought monitor will show even greater improvement across the state.

The drought monitor report released Thursday is based on information gathered through Tuesday morning. “It reflects conditions prior to when about half of the rain from this last system came through, so things are even more moist now than what the monitor is indicating,” Hillaker said.

The drought recovery in Iowa began last October and the last four months have all been slightly wetter than normal, according to Hillaker. Meanwhile, the first 11 days of April have been extremely wet and more rain is in the forecast for early next week.