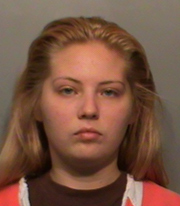 A teenage girl is in custody in connection with one of two homicides in Des Moines over the weekend.

Des Moines Police received a call just before 1:30 Sunday morning on the report that a person had been shot inside an apartment at 605 Forest Avenue on the city’s north side.

When officers arrived, they found a young man inside the apartment was dead. The victim was later identified as 19-year-old Anthony Denzell Moss of Chicago.

Police say a 16-year-old girl, Hailey Bass of Des Moines, went to the Des Moines Police Department Monday night and after an interview was charged with first-degree murder.

Bass is not enrolled in school. Investigators are not discussing a possible motive in the case. No arrests have been made in connection with another homicide investigation in Des Moines.

Police say 20-year-old Kenyatta Taylor was shot sometime before noon on Sunday outside a building at the Oakridge Neighborhood Apartment Complex. He died Monday morning. Police say the two shootings are not related.