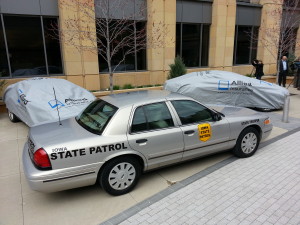 Vehicle thieves could be in for a big surprise the next time they break into a car in Iowa.

The Iowa State Patrol and Nationwide Insurance Company have launched a statewide initiative to deter and catch vehicle thieves in the act.

The initiative — launched Tuesday with a press conference outside the Nationwide Insurance building in downtown Des Moines — involves a couple of “bait cars.” The cars, donated by Nationwide, will be placed in areas known for vehicle theft.

The computerized cars are monitored from a remote location by Troopers. “Inside the vehicle, there are hidden cameras, there’s the ability to turn the ignition on and off and also lock and unlock the doors,” Garrison said.

“There are a number of things hidden inside that vehicle…but it’s not going to appear to the normal person that the vehicle is abnormal.” If a would-be thief gets into a bait car, they could be trapped inside by the Trooper monitoring the vehicle.

Similar projects have proven successful in other states, but this is the first time it’s been tried in Iowa. “The biggest factor we’re looking at is deterrents,” Garrison said. “If we can stop one or two or 100 (vehicle thefts), that’s the biggest thing to us.”

The two bait cars were hidden under vehicle covers Tuesday and not unveiled to the media. Garrison said several more of the highly equipped vehicles will be deployed to communities around Iowa over next few months.