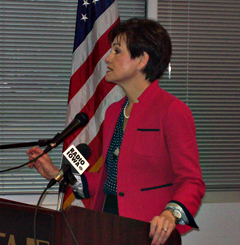 A room full of long-time Iowa Republican Party activists offers a variety of different views on just who is the party’s best candidate for the U.S. Senate.

“It’s got a long ways to go before someone is selected,” Severino said.

Severino was one of about 60 people who gathered for this morning’s meeting of The Des Moines Conservative Breakfast Club.

According to Severino, Republicans have been hurt by the combined 32 years that Bob Ray and Terry Branstad have held the governor’s office.

“I’m flattered to even be considered,” Reynolds said. “There’s great people throughout the state that are doing the same thing I’m doing and that’s talking to people, talking to grassroots activists.”

According to Reynolds, she’s had an “interesting discussion” with her own family because of what happened after the family meeting she held to talk about running for the state senate.

“We kind of went around the room and they said, ‘No, I don’t think so mom.’ ‘No, I think you should stay (county treasurer),’ ‘No, no, no,’ and so I got up the next morning and I said: ‘I’m going to do it!’ Now this doesn’t mean anything about this race,” Reynolds said, as the crowd laughed. “I’m not trying to tie the two together.”

AUDIO of Reynolds’ response to a member of the audience who joked the reason reporters from Radio Iowa and The Cedar Rapids Gazette were covering the event because she may be running for the U.S. Senate.

David Oman, a Republican candidate for governor in 1998, said at least three Republicans besides Congressman Steve King, State Ag Secretary Bill Northey and Reynolds are thinking about a senate race. According to Oman, it’s time to get a campaign started.

“If people are going to get into a campaign they’ve got to make that personal decision, put a team together, go around, introduce themselves and then start going to the county fairs and the parades and all of the events that we have in Iowa through a colorful summer,” Oman said. “You don’t do that overnight, so the end of April, early May is a very important time for people who are seriously pursuing this sort of race.”

“I also think she would be very good as a governor if that is a possibility for her in the future,” Corning said, “so it will be interesting to see what her decision is and, of course, what other decisions are.”

Matt Whitaker — a 2002 candidate for State Treasurer who served as a federal prosecutor during George W. Bush’s administration — is making his intentions clear.

“If Steve King elects not to do it, then I’m going to run, but obviously you just can’t step out and announce immediately after that because we’re all in a holding pattern right now,” said Whitaker, who attended this morning’s Des Moines Conservative Breakfast Club meeting.

And Whitaker plans to run even if the lieutenant governor or ag secretary do.

“I think a good primary would be healthy for the party and, as the lieutenant governor said, we need to find the best possible candidate to run against Bruce Braley.” Whitaker told reporters. “…I don’t think anybody wants a brutal primary, but at the same time open senate seats only come around every so often, so at the end of the day you can wait your turn — and your turn will never come or, as my friend Tim Pawlenty said, you step to the front of the line and make it your turn.”

Darrel Kearney a long-time Republican activist who worked for Chuck Grassley’s first senate campaign in 1980, when Grassley was not favored to win either the GOP primary or beat Democratic Senator John Culver. Kearney predicted 2014 “can  be a repeat” of 1980.