You are here: Home / News / Governor Branstad talks from China about trade trip 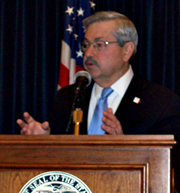 Governor Terry Branstad spoke with reporters today  from the Hebei Province in China where he is on a trade mission with an Iowa delegation and three other governors.

Branstad says the meetings have been very productive, but he stopped short of making any announcement of new trade agreements.

“I anticipate that when we get back in the weeks and months ahead that there will be specific announcements that’ll be made. But we’re not ready to make an announcement at this time. But there are a lot of prospects I think as a result of this,” Branstad says.

The governor met with China President Xi Jinping and continued the relationship started when Xi first visited Iowa nearly 30 years ago as a lower level official as part of the sister state agreement with China.

Branstad says he will make some announcements later on plans for celebrating the 30th anniversary of that sister state agreement.

The governor says they visited the Agricultural University in the province and the Great Wall automotive plant. Branstad says the plant makes cars, trucks and SUV’s — with production of one-thousand vehicles a day.

“A very impressive facility and the president is a woman. And she’s been the president for 15 years and the company is only 22 years old,” according to Branstad. “It’s a pretty impressive, they showed us their facilities where they test for crashes. We also went through on carts and saw the production. The production is very mechanized, very clean, very efficient.”

The group is in China at a time when tension is high with North Korea. Branstad says he did not talk about the issue, but U.S. Secretary of State, John Kerry, has been in China during their trip.

“And I know he did meet with president Xi Jinping, so I’m sure that issue came up during their discussion. Basically as state governors and provincial governors we really don’t deal with foreign policy, so that issue did not come up,” Branstad says.

One other thing the governor says the Iowa delegation has not done is go sightseeing. “No, this has all been focused on business, so we didn’t go to the Great Wall or the Forbidden City. We’ve done some of those things in the past. But this was all business, a very short trip,” Branstad says.

It was just after 10 o’clock in the evening when Branstad spoke with reporters just after nine a-m Iowa time. The delegation returns to Iowa Thursday.