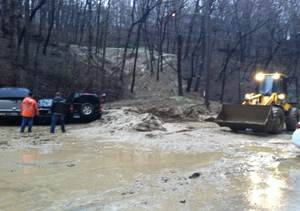 Officials had to clean up a mudslide at the Mayflower Residence Hall at the University of Iowa.

The parking lot behind Mayflower became inundated with several feet of mud and debris around 11:30 p.m.

Amy Franco, a Mayflower Hall Coordinator, says no one was injured but the mudslide did cause some minor damage to vehicles.

“The mud moved one vehicle particularly and that one vehicle started a chain reaction with four other vehicles,” Franco said.

Heavy equipment was brought in to move the mud and clear the parking lot. “We had a skid loader and a bulldozer hauling mud to dump trucks,” Franco said.

“That process started about 3:30 a.m. and it probably concluded between 7:30 and 8:00.” The parking lot remains closed and Mayflower residents are being asked to relocate their vehicles so the cleanup can be completed.

“Right now, the facilities department is working on trying to correct the problem so we don’t have additional sliding and they’ve cleaned up the parking lot as best as they can for the time being,” Franco said.

The rains also flooded parts of Dubuque Street in front of Mayflower.