You are here: Home / News / Harkin says door has closed for others, endorses Braley for US Senate (AUDIO) 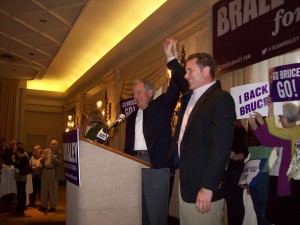 Harkin announced in late January that he would not seek reelection in 2014 and did not have a “favorite” to succeed him. On that day three months ago, Harkin said it was not his job to “pick somebody” — that it was up to Democrats to do that. But this past weekend Harkin announced that Bruce Braley has “emerged” as the Democratic Party’s candidate for the senate.

The door has closed for any other Democratic candidate now, according to Harkin.

“I think it’s quite clear that we have our candidate,” Harkin told reporters. “We couldn’t ask for a better candidate.”

Braley credits Harkin for getting him involved in politics when Braley was a student at Iowa State University and Harkin was seeking reelection in the U.S. House in 1978.

“He’s been my mentor,” Braley told reporters. “He’s been my friend and he’s been my hero for many, many years, so this is an extraordinarily significant endorsement for me personally and I couldn’t be prouder to have it.”

Braley was first elected to the U.S. House in 2006, but Braley had to face two Democrats in a primary and finished just 860 votes ahead of his closest competitor. The memory of that primary is still fresh in Braley’s mind.

“I’ve lived through a tough primary fight and nobody likes to go through them, so I am excited about the possibility of clearing the primary,” Braley told reporters.

Harkin quickly chimed in: “I just want to make it clear that we Democrats have our candidate for the United States Senate. Bruce Braley is our candidate. We are united behind him.” 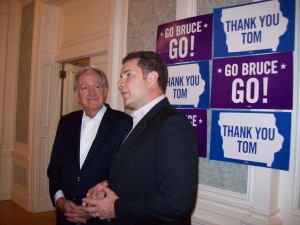 The two men appeared before about 150 supporters in a Des Moines Saturday afternoon to publicly seal the deal.

“I’m here today to make it official. Like that sign says back there, I back Bruce,” Harkin said, to cheers.

Braley held up another sign that said: “Thank you Tom.”

“We need to get to work now. I can tell by your being here tonight that you’re fired up and ready for 2014 so thank you all for coming and let’s get to work,” Braley said to conclude.

Several Republicans have said they are considering a run for the U.S. Senate, but a Republican candidate has yet to emerge.