You are here: Home / News / Kim Reynolds is not running for U.S. Senate 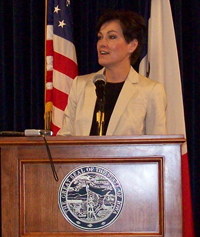 Lieutenant Governor Kim Reynolds sent an email to supporters this afternoon, saying she’s decided not to run for the U.S. Senate.

Reynolds said she has had “serious and thoughtful discussions with family, friends, supporters and constituents” about the prospect of running for the U.S. Senate in 2014, but she has decided to “remain as lieutenant governor.”

Braley has been lining up support from key constituencies in the Democratic Party, and this past weekend Braley got a public endorsement from Harkin.

Republican Congressman Tom Latham decided against running for the Senate in February. Congressman Steve King has yet to announce his decision about the race, although he said a few weeks ago it will be a “slightly uphill battle” for any Republican candidate.

State Ag Secretary Bill Northey is considering a run for the U.S. Senate. Matt Whitaker, a former U.S. Attorney who was the GOP candidate for state treasurer 10 years ago, has said he’ll run if King doesn’t.

Reynolds — in that email to supporters — said she and Governor Branstad “still have a lot to accomplish.” Branstad’s term as governor is up in 2014, as is hers as his running mate.