You are here: Home / Business / Robberies at pharmacies increasing with tighter controls on prescription drugs (audio) 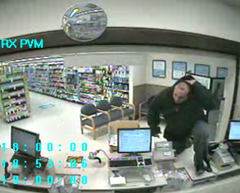 A security camera caught this man robbing a pharmacy in Des Moines.

Pharmacy robberies are becoming more frequent across the country and here in Iowa.

Nationwide, prescription drug robberies have increased 80% in only four years. Steve Lukan, director of the Iowa Office of Drug Control Policy, says one reason is more pharmacists and doctors are participating in prescription drug monitoring programs.

That’s preventing criminals from filling out fake prescriptions and having them filled at multiple pharmacies.

“As that tool is becoming more widely used and is slowing down and stopping drug diversion, I think you’re seeing some people take the next step – which is actually breaking into and robbing pharmacies to obtain these drugs,” Lukan says.

Drug “take back” campaigns to rid homes of unwanted or old prescription drugs have also had an impact. Lukan says emergency rooms around Iowa are also becoming more strict with the pain medications they’ll prescribe.

“That was really a prime target for many drug diverters or traffickers,” Lukan says. “They would sort of crash multiple ERs and obtain prescription pain medications from many of them.” This month alone in Des Moines, there have been at least two rather dramatic pharmacy robberies.

In one case, a man rammed his vehicle into a building to gain entry to a pharmacy and take at least $2,500 worth of oxycodone, hydrocodone, and other drugs. In another case, a man was captured on a Walgreen’s surveillance camera climbing over the pharmacy counter, displaying a knife to employees, and leaving with prescription drugs.