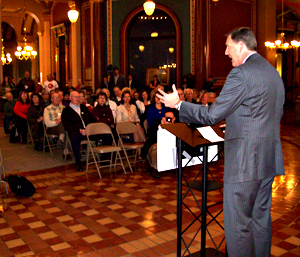 Danny Carroll, a former Republican legislator who lobbies full-time at the statehouse for The Family Leader, coached the crowd.

The group is pressing for a change in state policy that would forbid state tax dollars from being used to perform abortions on Medicaid patients who are rape or incest victims, or who are carrying a fetus with severe abnormalities.

“The Bible does not say that the wicked shall rule or that the righteous shall rule,” said Chuck Hurley, another former GOP legislator who is The Family Leader’s vice president. “The Bible says the diligent shall rule and the sad fact is that for the last few decades the pro-abortionists and the homosexuals and the socialists have been more diligent than we have been on public engagement.”

Bob Vander Plaats — a three-time Republican candidate for governor who is The Family Leader’s president and CEO — was the rally’s opening speaker.

“We believe government exists to promote what is good and what is righteous — so if it’s good and righteous, we’re for it,” Vander Plaats told the crowd. “If it is bad and it is against God’s heart, then we’re against it.”

Vander Plaats said his group “honors every gift of life.”

“From conception to natural death — with no exceptions,” Vander Plaats said, to applause from the crowd.

“Remove the judges, intimidate the court? That’s not an option,” Becker said. “I’ll tell you what is: a state constitutional amendment that finds a right to life.”