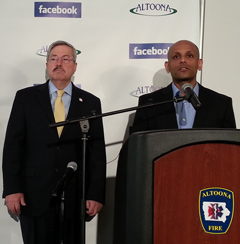 A top executive with Facebook says a massive data center to be built in central Iowa will be among the most advanced and energy efficient of its kind.

Jay Parikh, vice president of infrastructure engineering for Facebook, was in Altoona Tuesday to officially announce the social media giant would construct a 476,000 square-foot data center in the Des Moines suburb.

“The site has ample access to power and water. It is also very close to great network connectivity, which will allow us to connect to all of the billions of people out there,” Parikh said.

“Most importantly, we’re very excited about the talent pool in the surrounding area.”

The project is expected to create hundreds of construction jobs and at least 31 full-time operations jobs. Parikh confirmed that Facebook plans to build up to two more data centers in Altoona in years to come, adding more employees.

The company was evaluating several sites before choosing the location in Altoona. Parikh said Iowa’s status as a leader in the wind energy industry was a big factor in the decision. “We’re committed by 2015 to be able to achieve 25-percent renewable energy mix in our data center footprint,” Parikh said.

“We’re working with all the different regions that we have data centers in and obviously here in Iowa, it would be something where we’d employ the wind,” Parikh said. Facebook’s other data centers in the U.S. are located in Prineville, Oregon and Forest City, North Carolina.

Parikh said the $300 million data center to be built in Iowa will include many of the same features used in the other locations, including an innovative outdoor-air cooling system. “When we did an analysis of this back when we launched the Prineville data center, we found our data center was 38-percent more energy efficient than the conventional data center,” Parikh said.

The first Facebook data center to be built on a 194-acre site in Altoona is expected to be up and running late next year or in early 2015.