You are here: Home / News / Lieutenant Governor Reynolds, on a race for governor: “Not ruling it out” 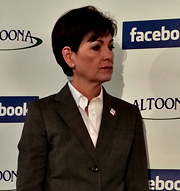 Kim Reynolds says she decided not to run for the U.S. Senate because she had “unfinished work to do as lieutenant governor” — but Reynolds isn’t ready to say whether she’s preparing for a campaign of her own or as Governor Terry Branstad’s running mate.

“I appreciate the opportunity to work with Governor Branstad. I think we make a great team,” Reynolds said today during an interview with Radio Iowa. “…We’ve got a lot of work to do and we’re focused on getting that done and those decisions will come in the future.”

“Love what I’m doing. I love serving Iowans. I love public service, so what that looks like in the future, I don’t know,” Reynolds said. “Not ruling it out.”

Reynolds talked with her family about a run for the U.S. Senate on Easter Sunday, then last weekend Reynolds sat down with her husband and three daughters for an extended conversation. That’s when she ruled out running for the senate.

“Talked a little bit more about what I was currently doing and what some of my goals were as lieutenant governor and how that would change if I seriously took a look at running for the U.S. Senate and we just agreed that I love what I’m going,” Reynolds said. “I’m proud of the initiatives I’ve been working on and I still have some more to do.”

Reynolds recently flew to Washington, D.C. to see “what the landscape would look like” and how a “good” campaign for the U.S. Senate could be run. Reynolds said she wouldn’t have had to resign from her current role if she had launched a race for federal office.

“But it certainly would be a distraction from what I was trying to do as lieutenant governor,” Reynolds said. “We’re so focused right now on getting our policies through the legislature.”

Reynolds served 14 years as Clarke County Treasurer, then ran a successful campaign for a seat in the state senate in 2008 before her 2010 campaign as Branstad’s running mate. In Iowa, governors choose their lieutenant governor/running mates in the same way the prsident chooses a vice president.