You are here: Home / News / Price is Right road show comes to Iowa 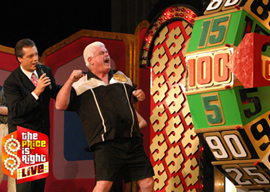 The nation’s number-one television game show is marking its 40th year on the air by going on the road, with one stop in Iowa.

Host Pat Finn, a veteran of many game shows, says the traveling version of “The Price is Right” pulls contestants out of the audience and lets them “come on down” to win appliances, vacations and new cars.

They play the classic games from television’s longest-running and most popular game show.

Finn says, “If you get a chance to come to the “Price is Right Live” show, it’s going to be just like being in Hollywood, the music that we play, the props that you see on the stage, the announcer announcing names to ‘come on down,’ it’s going to have the exact same feel.”

He says the audience will feature a variety of folks. “The people that show up for the live show are very similar to the TV show in the sense that it’s a wide range of demographics,” Finn says. “We’ll have college students who show up and we’ll have the 72-year-old grandmother who’s been watching this since she was in her 30s.”

From Plinko to Cliffhangers to the Big Wheel, and even the Showcase Showdown, all the favorite games are played just like the hit TV show. “If you come and see the show at Television City in Hollywood, only a certain number of people make it to TV,” Finn says.

“In our show, we’re going to be pulling 60 different names throughout the course of the evening so there’s a pretty good chance you’re going to hear your name and get a chance to win some really nice prizes that range from some smaller items all the way up to a brand new car.”

The Price is Right Live will be at the Civic Center of Des Moines on Thursday night. For more information, visit: www.civiccenter.org.