You are here: Home / News / Pro: Too many amateur storm chasers endanger themselves

A self-described “storm chaser” says it’s getting more hazardous to pursue his passion, not because of severe weather but due to so many amateurs who also chase storms. 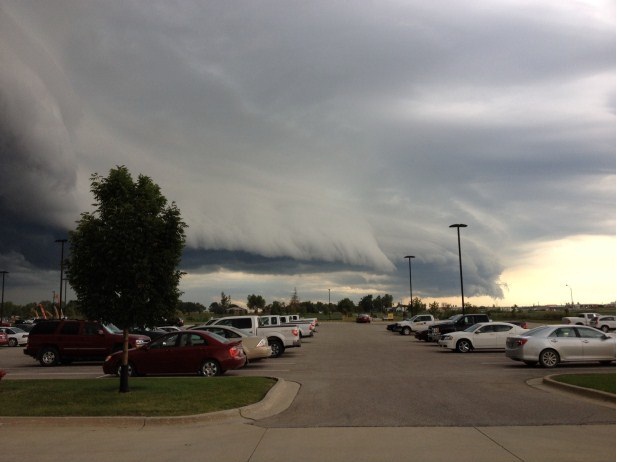 Shelf Cloud near Des Moines in 2012

Jon Davies is a Kansas City-based meteorologist who seeks out destructive weather systems, though he knows storm chasers have a bad reputation for putting themselves in harm’s way.

“Storm chasing can be exciting and dangerous at times,” Davies says. “Unlike those characters in ‘Twister,’ we see Bill Paxton and Helen Hunt, unlike them, I don’t tie myself to a pipe in a barn with sharp instruments around, above ground when an EF-5 tornado is bearing down.” That 1996 film was shot partly in Iowa.

“Of course, with the movie ‘Twister’ and all these TV shows like The Discovery Channel’s ‘Storm Chasers,’ there’s more traffic out there these days,” Davies says. “Sometimes, things get kind of crowded out there. The weather isn’t the most dangerous thing out there sometimes now, it’s the traffic.”

Davies chased an EF-4 twister that killed 13 people at a mobile home park in Andover, Kansas, in 1991. Davis also chased the Daykin-to-Hallam tornado in Nebraska, a destructive twister nine years ago that remained on the ground for more than 50 miles.

Davies says storm chasers need to be especially cautious when encountering rain-wrapped tornadoes or those that strike at night.

“I do encourage people who want to storm chase, don’t treat it casually like, ‘I think I’ll go out there and look at that storm and put my family in the car to do it,’ you need to know what you’re doing and you also need to not block the roads.”

Davies worked at The Weather Channel in the 1980s and got into storm chasing, which he says is his motivation for researching the weather. He’s published research on components of instability and wind shear and the probability of major tornadoes forming.

He and his wife have published a book for kids: “Storm Chasers! On the Trail of Twisters.”