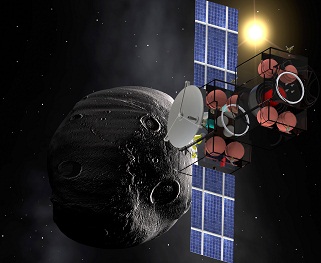 Space-gazing scientists at Iowa State University are keeping close tabs on a large asteroid that’s blazing a path toward Earth.

It’s called Apophis, named after an ancient Egyptian god of darkness and chaos.

Professor emeritus John Basart, at ISU’s Asteroid Deflection Research Center, says initial calculations showed this massive object could hit Earth, but it’s now thought the asteroid will be a near miss — though he says its orbit is shifting.

“Asteroid Apophis will come close and as it comes close to us, our Earth’s gravity is going to affect it quite a bit, so then it’ll continue zooming around the sun and then it’s going to come back to us again,” Basart says.

“When it comes back to us, it’s might be closer than the first time. So far, it’s thought that Apophis is going to miss us both times.”

Don’t worry about marking your calendar for the celestial near-collisions. Apophis, which is a bit bigger than three football fields, should breeze past in 2029 and 2036.

One of Basart’s specialties is researching how solar energy can change the trajectory of an asteroid. Our sun is just one of several things that may alter the big rock’s path, making it hard to know exactly how close it will pass to our planet.

“The asteroid’s orbit is not only affected by the sun, which is the main body it’s going around, but it’s affected by the Earth, and if it gets somewhat close to the Earth, our moon affects it, other planets might affect it,” Basart says. “It’s not easy to predict exactly 20 years in the future, 50 years in the future, just where an asteroid is going to be. We can come pretty close.”

Observations of the distant asteroid in 2004 found that Apophis had a two-point-seven-percent chance of hitting the Earth in 2029, but scientists now say, it’ll miss us.

The mammoth meteor measures about 975 feet in diameter, which Basart says is plenty big to cause serious problems for our planet. By comparison, the asteroid that exploded over Russia in February was just a pebble, and it damaged hundreds of buildings and injured more than 1,500 people.

“It’s definitely bigger than what went by Russia,” Basart says. “If it hit a city, it would be very, very severe damage. We need to mention that since the Earth’s surface is mostly covered with water, if you just look at the probabilities, the chances are, it’ll land in the water. ‘Course it could cause a very large tsunami and we know what happened in Japan when a large tsunami occurred and it could cause a very large one.”

The latest calculations show Apophis’ chances of hitting Earth on April 13th, 2036, are about one in 140-million.