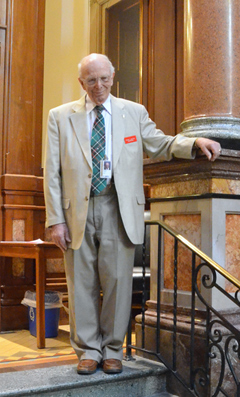 A man who’s worked as a doorkeeper in the Iowa Senate for 15 years is logging some major miles.

Eighty-six-year-old Frank Loeffel likes to keep track of the numbers. From mid-2007 through the end of 2011, he walked 6034 miles.

It means Loeffel — at the age of 86 — is walking a 20-minute mile. As a door-keeper in the Iowa Senate, Loeffel gets half-hour breaks, so Loeffel puts on his walking shoes and strides the wide halls in the capitol’s first floor to get his miles in. When the legislature’s not in session, he still keeps up his daily walking pace.

“I think that spending an hour and 20 minutes out of 24 hours is good for my health,” he says.

Loeffel retired in 1992 after a career in plant genetics. Lueffel doesn’t think his gait has changed much as he’s aged. He still has a 30-inch stride.

Loeffel began his walking routine shortly after his wife died.

“I lost 15 pounds in the first three months after my wife’s death,” Loeffel says, “and since that time I think I’ve been plus or minus two pounds of about 166.”

He has some advice for couch potatoes, even those who may be half his age: “get up and go…I think once you get in the habit, you’ll keep doing it. You can always walk. I mean, you don’t need a lot of equipment.”

Loeffel spends about nine-and-a-half hours per week walking, far above the Centers for Disease Control recommendation for older adults. The CDC recommends that people over the age of 65 walk briskly for at least two and a half hours per week.