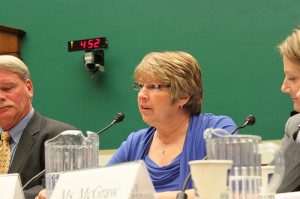 The widow of murdered Aplington-Parkersburg football coach Ed Thomas was in Washington, D.C. this morning to testify before a congressional hearing on mental health and gun violence. Jan Thomas spoke for just over four minutes and urged Congress to update a federal health care privacy law known as HIPAA.

On June 24, 2009, Thomas’ husband was shot and killed in the AP High School weight room by former student Mark Becker. Jan said while she lost her husband, the community lost a mentor, friend, teacher, and a coach. “But the real tragedy of that day is the fact that it could have been prevented,” Thomas said.

The day before the shooting, the 24-year-old Becker had been released from a hospital where he was sent for a court-ordered psychiatric evaluation. “Less than 24 hours before my husband died, Mark decided he didn’t want to stay at the hospital. Not following the advice of his doctor, Mark was dismissed. No one knew,” Thomas testified. “Law enforcement was not notified, even though they had requested that the hospital let them know when he was being dismissed. The hospital’s justification for not notifying law enforcement prior to his release was that HIPAA prevented this disclosure.”

During the murder investigation, it was revealed the mentally-ill Becker had previously expressed feelings of animosity and resentment toward his former coach. Jan Thomas closed her testimony with a plea. “I ask you, is the privacy of one individual more sacred than a life? Is it more important than the welfare of the general public? Is it more important than allowing our law enforcement to know when a potentially violent offender is being released back into the very communities they risk their own lives to protect?”

“Ed was an inspiration to so many in our community. Most importantly, he was a loving son, husband, father, grandfather, and brother. I urge Congress to update this law so we can prevent further tragedies like this one,” Thomas said.

Leon Rodriguez, with the U.S. Department of Health and Human Services, testified that HIPAA does not prevent health care providers from sharing patient information with law enforcement or family members if they believe the patient presents a serious danger. But, others testified many medical professionals are either unaware of those provisions or fail to act out of fear of being sued or losing their jobs.