You are here: Home / News / Branstad on Senate race: “The last thing we need is another congressman” (AUDIO) 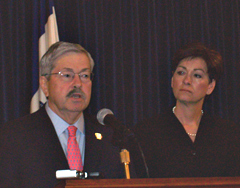 Republican Governor Terry Branstad seems to be suggesting Republican Congressman Steve King either is not running or should not run for the U.S. Senate.

“I really believe that Iowans want somebody that will serve in the Senate that will be an Iowa problem solver, not another congressman,” Branstad said this morning during his weekly news conference.

“You know congress is a mess. We’ve seen them spend a trillion dollars more than they take in every year and so the Democrats have decided, ‘Well, we’re going to send up another congressman.’ That’s the last thing we need is another congressman in the United States Senate.”

Democratic Senator Tom Harkin announced in January that he would not seek reelection in 2014. Democratic Congressman Bruce Braley started running for the Senate in February, but no Republican has stepped forward. Several in the GOP have said they’re considering it, including Congressman King, state Senator Joni Ernst of Red Oak and state Ag Secretary Bill Northey.

“The contrast of having an Iowa problem solver versus somebody who that’s had all of their service in Washington, D.C. in the congress would be a very good thing for Republicans,” Branstad said.

Steve King served six years in the state senate before being elected to congress in 2002. While Branstad told reporters this morning that King was a “very effective” state legislator, the governor then doubled down on his anti-congressman pitch.

“That last thing we need is another congressman in the United States Senate,” Branstad said. “The congress is so messed up. They are so unable to make tough decisions. They are so far out of touch with the public in terms of their spending policies that we just need somebody that’s going to come there with fresh ideas and we’ve got some of those in Iowa.”

King, in a written statement to reporters seeking comment, said: “There’s no way to respond to the inquiry while maintaining the necessary verbal discipline.”

(This story was updated at 6:48 p.m. with additional information.)