You are here: Home / Crime / Courts / Sioux City officer laid down, floored his car in reverse to escape shooter 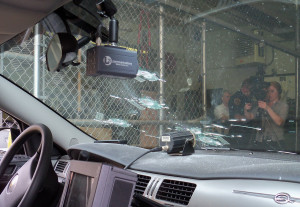 Bullet holes visible from the inside of the Sioux City squad car involved in Monday’s shooting.

The Sioux City police chief says an officer acted quickly and saved his own life after a known gang member opened fire on him during a routine traffic stop for a seatbelt violation Monday.

Chief Doug Young says officer Kevin McCormick stopped the car on the city’s west side and then Jamal Dean jumped out of the passenger side of the car and started firing at the officer with a .22 rifle.

“A total of eight rounds impacted the windshield of the patrol vehicle,” Young says.

“Officer McCormick had not exited his vehicle and was pinned down. The officer’s instincts and training kicked in. Officer McCormick laid down in the front seat of the patrol vehicle — put it in reverse — and floored it to get out of harm’s way.”

McCormick was hit with one shot. “Officer McCormick maintained his composure throughout the ordeal. Even after realizing that he had been hit, he was broadcasting his status and a physical description of the suspect who had fled to the south from the shooting area,” Young says. 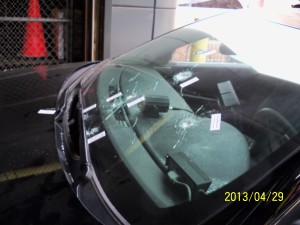 Winshield bullet holes visible in from outside the car.

McCormick is the son of another Sioux City officer and has been on the job about 15 months. Young says he is going to be okay.

“Officer McCormick was transported to Mercy Medical with a wound to the forehead above the right eye. The bullet was surgically removed and officer McCormick will make a full recovery,” Young says.

The chief says there were two women in the car and three children ages one, five and six. The children have been turned over to DHS. Jamal Dean, who is 22-years-old, is charged with attempted murder and remains at large.

Young says Dean has a long record and is a suspect in several shootings. Police are asking anyone with information on Dean’s whereabouts to call the police department.